Regression 1 – Normality, and the Chi-square, t, and F distributions 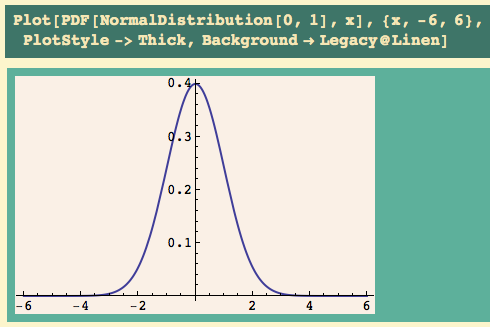 (There are more drawings of the distributions under discussion, but they’re at the end of the post. This one, as you might guess from the “NormalDistribution[0,1]”, is a standard normal.)
END_OF_DOCUMENT_TOKEN_TO_BE_REPLACED

We need a technical term. I have a source against which I can check my answers, so I want to compute the “odds against” improving a hand. The odds against something are computed as the number of bad outcomes divided by the number of good outcomes.

OK, the probability of being dealt at least a pair is almost 50%.

The odds against being dealt at least a pair is bad outcomes divided by good outcomes: 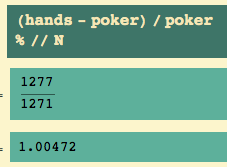 That is, the odds against being dealt at least a pair are just barely greater than 1; so close in fact that we might as well call it “even odds”.

Now let’s suppose you’ve been dealt at least a pair – or that you’ve been dealt four cards toward a straight or flush. (Worthless as they stand, they have great potential.)
END_OF_DOCUMENT_TOKEN_TO_BE_REPLACED

Before I ever played poker – at home – I was required to learn a mantra: one pair, two pair, three of a kind… straight, flush, full house… four of a kind, straight flush. From least to best, those are the possible winning hands. (In fact, I will distinguish a royal straight flush from other straight flushes.)

What is the probability of being dealt each one of them?

After the cards have been dealt and bet on, each player may discard some and get replacements. In a second post I will ask and answer: what are the odds against improving any given hand?

There is an excellent wiki article out there. In fact, the nice way to calculate the probabilities comes from it (especially for one pair, and for nothing).
END_OF_DOCUMENT_TOKEN_TO_BE_REPLACED