January 31, 2008 — rip
recall that we had discovered that harman’s new F variables were uncorrelated and standardized: they had mean 0 and variance 1. he had implied, however, that the variances of the new variables would be the eigenvalues of the correlation matrix of Z.
he didn’t get that. can we?
instead of his model

(where Z is the standardized data, A is a weighted eigenvector matrix, and F is the transformed, new, data), which implies

,
(where P is an orthogonal eigenvector matrix, and Y is the transformed, new, data), i.e.

by using an orthogonal eigenvector matrix P, for which

biblio is now a page…

well, it just seemed better to make it a page. and it seemed worth doing as i added a few more books. after it gets bigger, i’ll be able to create subpages for specialized bibliographies. i’ve been too busy lately. adding a few books was something i could do in the evenings.

i’ve had a friend visiting for a while, and i had better things to do than math. oh, math is good, but friends are better. in moderation.

January 21, 2008 — rip
harman gave us two outputs as a result of his analysis: a table and a picture.
let’s consider the picture first. it clearly shows z2 and z5 similar, z1 and z3 similar, and z4 roughly in the middle between them. 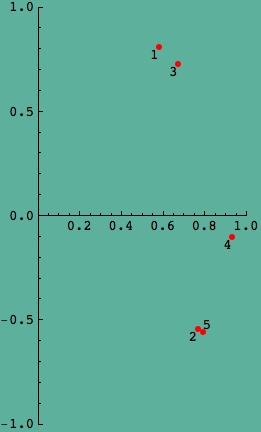 i don’t know about you, but this surprised me. should it have? well, let’s take a look at the correlation matrix, from which we got our results. i’m going to round it off just a little bit, so i can refer to 3-digit numbers instead of 5.
END_OF_DOCUMENT_TOKEN_TO_BE_REPLACED
Posted in math PCA. Tags: Harman, mathematics, PCA FA principal components factor analysis. Leave a Comment »

Less is more. And more is huge. It is easy for me to end up with huge posts to put out here, but I’d rather go with smaller.

In case it matters, I am using Mathematica to do these computations.

Here is an example, the first of several. This comes from Harman’s “factor analysis”. In order to emphasize the distinction between PCA and FA, he has one example of principal component analysis, and this is it.

Let me tell you up front what he did:

I also need to say that his conceptual model is written

And from the dimensions of the matrices it is clear that

Z and F are the same shape, with k rows.

But this is a fine thing, because we recognize that Z = A F is a change-of-basis equation for corresponding columns of Z and F; A is a transition matrix mapping new components (any one column of F) to old components (a column of Z).

END_OF_DOCUMENT_TOKEN_TO_BE_REPLACED

the poincare’ conjecture & other stuff

Ok, the holidays are behind me. One friend called me to make sure I was ok, because I had made no blog entries in two weeks. Well, my Xmas letter took a little longer than usual this year; and there was the return to work. I think that trying to write about mathematics had affected my letter-writing style, and I had to work at recovering it. For the Xmas letter, one of my guiding principles is to not take myself too seriously.

For this blog, however, I worry about the line between seeming all-too-human and seeming off-the-wall. What comes across as human in a personal letter may seem flaky in mathematics. Maybe I’ll just have to be myself and leave it for you to judge.

Donal O’Shea’s “the Poincare’ conjecture” arrived from Amazon Wednesday. I read chapters 1 & 2 before getting caught up in routine, then read the rest of the book last night (Friday).