If you have ever seen any syllogism, chances are it’s this one:

All men are mortal;
Socrates is a man;
therefore, Socrates is mortal.

As I have alluded to before, this distinction arises because we consider the possibility of an empty set. This affects the valid conclusions from such statements as “all unicorns are mortal”.

We take that statement to be true, even though we believe that unicorns do not exist; we take it that all zero of them are mortal.

We do not conclude, however, that some unicorn is mortal.
END_OF_DOCUMENT_TOKEN_TO_BE_REPLACED

Well, it has turned out to be an interesting week. Somehow I found enough time to do some meta-mathematics of my own.

Or to stumble across some by someone else. I was sorting through a pile of books that had been sitting on the floor of my library for too long. One of the books I found was called “Cognition” by Dodd & White. In one section it talks about why some syllogisms seem harder than others for people to get right. I haven’t taken notes on this yet, but I’m looking forward to it. It should serve as spice when I get to talking about syllogisms. Real Soon Now. Probably this weekend.
END_OF_DOCUMENT_TOKEN_TO_BE_REPLACED

This is the third post (excluding two “books added” posts) in the category “logic”, so if you need to, go back to the earlier posts.

In this post, I want to do two things.

First, I want to show you the duality between “for all” and “there exists”.

Let me jump right in.

END_OF_DOCUMENT_TOKEN_TO_BE_REPLACED

Let me say up front that this post includes thumbnail summaries of five books on color. In a way this is risky: having said something about these books, I can delay putting them into the bibliography. Well, I’ll just have to aim you at this post when I mention these books in other posts.
END_OF_DOCUMENT_TOKEN_TO_BE_REPLACED

How many colors in this drawing? 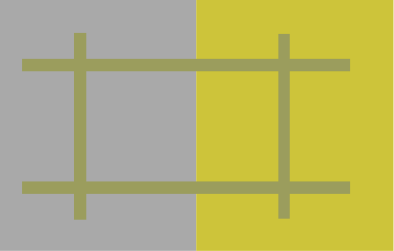 The whole point of that drawing is that all the interior bars are exactly the same XYZ — I know because I drew it — but they do not all look the same. To me, at least, the left ones look yellowish, but the bars on the right look like gray. This effect is called “simultaneous contrast”.

Let us ask an explicit question: does a set of XYZ coordinates specify a unique color?
END_OF_DOCUMENT_TOKEN_TO_BE_REPLACED

As I begin this draft, it’s Friday evening, and I’m tired.

I took some time off from real work this week, and I managed to look at logic, orbits, and color. In particular, I was fairly productive, answering some of my questions in orbits and color. (I ended up with more questions in logic.)

I have quantified at least one of the nonlinearities in color theory: my monitor, specifically the gamma correction curve(s). This was one of the two remaining topics I wanted to discuss… and I think I will try to put it in the context of everything else we’ve done (!). We’ll see. Maybe I should do it as a stand-alone calculation.

(The other color topic — still unsolved — was to construct an everywhere non-negative spectrum in the case where the fundamental (constructed from an XYZ) was negative over some wavelengths.)

Not surprisingly, as I keep reading about color, I keep thinking of more things to do. I finally broke down and ordered Fairchild’s “Color Appearance Models”, and a few other books that looked interesting. (The other expensive one was Kuehni & Schwarz’ “Color Ordered: a Survey of Color Systems from Antiquity to the Present”… and I ordered three books by Faber Birren — which may turn out to be more expensive per page though not in total cost!)
END_OF_DOCUMENT_TOKEN_TO_BE_REPLACED

I never planned on writing this post, and although it’s not complicated (say I who wrote it!), it was time-consuming. It grew out of my confirming that Copi & Cohen and Gensler (both books are titled “Introduction to Logic”) had exactly the same two lists of rules and tautologies. That made it relatively universal.

For what it’s worth, Copi (“Symbolic Logic”) has one different rule — the same total of 9, but one different; and Hummel (“Introductory Concepts for Abstract Mathematics”) has several more which are particularly suited to mathematics. In addition, Gensler also presented the material in another way, as one set of rules for simplifying expressions, and another for making inferences.

(All those books are in the bibliography, and were reviewed in the two most recent “Books Added”, here and here.)

The following can be found in Copi & Cohen, or in Gensler (although I have written them differently from both texts, and in a different order). On my computer, this fits on one screen.
END_OF_DOCUMENT_TOKEN_TO_BE_REPLACED

This may set a record for my shortest diary post. Well, it’s gotten longer than I thought it would be, but not by much.

I could just put one or two links out here, but let me make it an honest post.

As I finished reading a book last Saturday, I decided that I was probably coming down with a cold. The timing was wrong for it to be my mild allergy to my own cats — that kicks in in the morning when they are both sleeping beside me. I went out and bought chicken soup, frozen foods, and some medicine. I had a large supply of paper towels (10 rolls).

I was right, it was a cold. It never got very bad, never moved from my head to my throat, but my eyes hurt sometimes from the congestion.

It was, however, ironic. The book I had just finished reading was “The Great Influenza” by John M. Barry — the story of the deadly flu pandemic at the end of World War I.

I read when I could, watched TV when I couldn’t read. I did a little mathematics, but not much — and I’m still trying to catch up.

I am working on a logic post, and on the mathematics of orbits… and I’ve been playing with the fast Fourier transform and color. We’ll see if I get the logic post done this weekend.

I was more successful at rereading “Guns, Germs, and Steel” by Jared Diamond.

Rather than try to write an essay about something, let me give you two links.

The first one is a general link to mathematics in the movies, collected by a professor at Harvard.

The second one is a specific link to a really cool piece of mathematics from a “Ma and Pa Kettle” movie, in which they demonstrate that 25 divided by 5 is 14.

You might find it very instructive to isolate the mistake Ma and Pa Kettle are making. And, like me, you might get a kick out of the movie.