Before I ever played poker – at home – I was required to learn a mantra: one pair, two pair, three of a kind… straight, flush, full house… four of a kind, straight flush. From least to best, those are the possible winning hands. (In fact, I will distinguish a royal straight flush from other straight flushes.)

What is the probability of being dealt each one of them?

After the cards have been dealt and bet on, each player may discard some and get replacements. In a second post I will ask and answer: what are the odds against improving any given hand?

There is an excellent wiki article out there. In fact, the nice way to calculate the probabilities comes from it (especially for one pair, and for nothing).

Or we could write it a little more compactly as

But that’s if order matters. In a poker hand, it doesn’t matter. Well, then, given one particular set of five cards, how many ways could it have been dealt?

A more formal way to write that is to let this symbol:

Furthermore, it is often pronounced as the problem it solves. We read it as “52 choose 5” or “choose 5 out of 52”. That’s exactly what we did: we chose a subset of 5 cards out of a set of 52 cards (without replacement).

How many all-spade hands are there? This many ordered hands of one suit… this many unordered… so the number of flushes is 4 times that:

There is a cleaner way of stating that calculation: choose 1 suit out of 4; and choose 5 cards out of the 13 in that suit.

instead of “4”. But I like emphasizing the conceptual commonality.

Of all those flushes, exactly 4 are royal straight flushes.

Then the number of flushes which are not straights is:

Any straight has 40 choices for the lowest card, and 4 for each of the remaining, so there are

Now let’s rephrase that nicely. To get the total number of straights, choose 1 out of 10 for the lowest rank in the straight, and then choose 1 out of 4 suits for each of the 5 cards.

four of a kind

How many 4-of-a-kind hands? 13 choices for the kind, 48 possibilities for the 5th card:

A full house is three of a kind and two of another kind.

three of a kind

Do I believe that reasoning? Sometimes!

So let me do it cleanly. Choose two ranks out of 13 for the ranks of the two pairs… for each pair, choose 2 out of 4 suits… then pick one of the 44 cards other than these 8 to fill out the hand:

The numbers are the same — but I trust the second calculation. The first one is too ad hoc.

Let me confess that I have to do this one cleanly. I get it wrong any other way.

This is slick, in my opinion. It comes from the wiki link at the beginning of the post. Pick 5 ranks out of 13… but exclude the 10 straights of any one suit; for each of the chosen 5 ranks, choose 1 out of 4 suits… but exclude the 4 flushes. 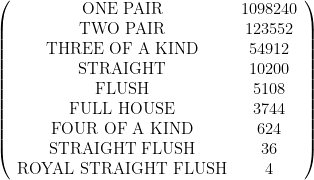 It’s nice to see that hands do get rarer as their value rises.

Now that we have collected the number of hands… how many valuable poker hands are there? Here are the individual numbers, so add them up:

Oh, while we have that list, let’s divide every entry by the total number of hands; this is the probability of being dealt each of these poker hands:

How many hands are of no value? We have computed

and what the sum of none and poker?

And how many possible hands did we compute that there were?

Good. By independently computing the valueless hands, we got a check on our computation of poker hands.

Finally, the ratio none/hands is:

… so the chances of being dealt 5 useless cards is just over 50%, but not by much. You could safely remember it as 50-50, for being dealt at least a pair.

In another post, I’ll look at the odds of improving the hand you were dealt.