Rotations: figuring out what a rotation does

I want to write a short emphatic post making one major point. I’ve made it before, but I think it needs to be hammered home.

In addition to the links in this post, you could use the Tag Cloud to find related posts.

I mentioned in this happenings post, near the end, that I had found a nice introductory book on the control of aircraft (Thomas Yechout et al., “Introduction to Aircraft Flight Mechanics…”, AIAA 2003, ISBN 1-56347-4344).

I looked at it yesterday morning. I was planning to spend the day working on the next regression post … and I did … but I figured I’d turn my kid loose first, and he wanted to play in that book.

I still think it’s a nice book… but two of their drawings for rotations are mighty confusing… at first glance, they appear to be wrong. It turns out they are right, but the display is unusual.

I’ve talked about this out before, but let me put it in a post all by itself. (This post seemed essential when I thought they had made a mistake; it is merely desirable once I saw that the reader had to take a careful look at their drawings.)

Suppose we are given the following rotation matrix…

The key question is: what does that rotation do?

The answer is crucial: it is either

… and when we apply that to the vector v, we get

which unambiguously lies on the x-axis. Good.

But there were two different ways to accomplish that. We start with 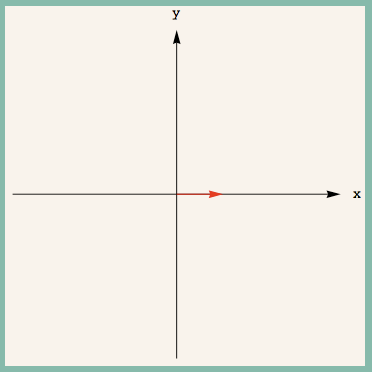 Either way, the vector v2 = Rv lies on the x-axis.

If we view that matrix as a coordinate transformation, then it is unambigously a CCW rotation (thru

If that was “a safe choice”, what’s a dangerous choice for checking it out?

Suppose we study the effect of that matrix on a different vector. Let’s take the unit vector along the x-axis, and a 90° rotation.

which says that we now have a vector which points along the negative y axis.

That is, we started with…

And that weirdness is why I strongly suggest that you investigate it using the safe choice: a 45° angle and a vector at 45° between the relevant axes. And yes, all of this works out just fine for the other two coordinate axis rotation matrices:

Back to the book.

I originally thought the authors got confused, that they drew that rotation as though rotating the unit vector CW meant that they were rotating the coordinate system CW. But they got the related drawing right for a rotation about the y-axis. So something else was going on.

The aerospace coordinate system for the earth is usually taken to have the x axis pointing north, y pointing east, and z pointing down. (That’s a perfectly fine right-handed coordinate system.) For the rotation about the z-axis, the book draws the x-axis vertically (“north”) and the y-axis going to the right (“east”). From that perspective, the rotation appears to be CW… and if you miss the labels on the axes — me raises hand — you’ll get the wrong idea.

But if you know how to work it out, you can be confidant that the matrices they gave us are, in fact, CCW rotations of the coordinate system about various axes. Then you know you are supposed to look at the text again and ask, “Why did they draw it clockwise?”

Let me close with one other discussion: transition matrix and attitude matrix. There’s a lot more detail here.

We construct an attitude matrix explicitly anytime we specify, “I want our new x axis basis vector (i) to be this.” (And our new j and k basis vectors.) Lay them out as rows of a matrix, and we have just gotten the attitude matrix which describes the new coordinate system.

We know — OK, I certainly know — that we are specifying an attitude matrix implicitly when we say, “Rotate the initial coordinate system as follows”. And that’s what people do when they write out the aerospace Euler angle sequence: first rotate about the z-axis, then about the (new) y-axis, and finally about the (new) x-axis. They are giving us a sequence of attitude matrices.

In other words, our given matrix

was presented implicitly as an attitude matrix for a rotation of the coordinate system.

We can confirm that. What is the new x-axis, i.e. the new unit vector i, in terms of the original basis? It’s the first row of that matrix: cos

OK, but what about the transition matrix? There are two essential facts:

But wait a minute! We figured out what our rotation was doing by applying it to a vector, namely to the old components of a vector, not to the new ones.

3 Responses to “Rotations: figuring out what a rotation does”