This is the 3rd post about the Bartholomew et al. book.

It would be convenient if Bartholomew’s model were one we had seen before.

We got their scores and loadings just by following their instructions. Although they didn’t use matrix notation, their equations amounted to

where V is an orthogonal eigenvector matrix of the correlation matrix,

is the diagonal matrix of (nonzero)

, X is the standardized data.

Let’s recall Harman’s model. He had

where Z was the transpose of the standardized data X:

and A is the

]-weighted eigenvector matrix, so we have

There are two crucial facts:

Terminology: Harman says the elements of F are the factor values, and the “coefficients of the factors” are loadings. I take it, therefore, that A is the loadings.

So can we compute F or F^T? In this case, yes: all the eigenvalues are nonzero, so A is invertible, and then

So let’s compute F^T. (You may have recognized

Before we do that, I want to be very careful about the signs of columns. In the previous post, for example, the A matrix which I computed differed from the A matrix which Bartholomew et al. computed. We know that’s ok, because eigenvectors of length 1 can be multiplied by -1 and still be eigenvectors of length 1. But I was not consistent about how I changed signs to confirm that our graphs matched: in fact while I had a different A matrix from them, I defined my “component score coefficients” to match theirs. That was not consistent.)

But now, if I want to check my computations by multiplying the scores times the loadings, I need a consistent set of signs for the columns.

My personal preference for achieving that is to start with the orthogonal v matrix from the SVD (singular value decomposition) and construct A from it. You’ll see why, below.

What follows seems to be my adopted recipe for doing PCA / FA, although it’s cluttered here by comparisons to Bartholomew’s calculations. You’ll see it again.

I remind us that the dimensions are

That is, u and v are square (as they must be: they are orthogonal); and w is the same shape as the data X.

That’s all I want the correlation matrix for: its eigenvalues. Instead of its eigenvector matrix V, with whatever signs Mathematica® returns, I use the v matrix from the SVD.

Then create a diagonal matrix whose entries are the square roots of those eigenvalues; that is, the diagonal entries are

Let me remind us that w0, the cut-down w, is the same shape as

I promised in the previous post that there would be one caveat, and here it is: w0 is proportional to

The proportionality constant is

; in this case, 5 because we have 26 observations. We have

It’s that proportionality that I know I will mess up unless I explicitly start with the eigenvalues of the correlation matrix.

-weighted matrix A is

and its first 2 columns, rounded off, are…

Those are loadings. They happen to match Bartholomew’s choice of signs.

The “component score coefficients” are computed as

-weighted matrix v… that inverse square root tells me, and you, I hope, that the “component score coefficients” are the reciprocal basis to A.

The first two columns of the “component score coefficients” are… 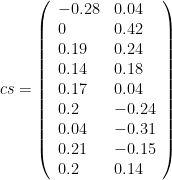 They, too, match Bartholomew et al., as we would expect, since the first two columns of A matched. (I have labeled those “cs” but they are only the first two columns of the cs matrix, which is 9×9. I will consistently abuse that notation, because I’m going to be displaying matrices which are equal but computed differently. I really am displaying the results of computations, not just copying the thing that I’m supposed to get.)

The scores are computed by projecting the data onto the “component score coefficients”. That told me that Bartholomew’s scores were the new components of the data wrt the A basis. Here they are, as Bartholomew would compute them:

I need to plot these, to confirm that they are the same as Bartholomew’s.

Now I’m ready to get

and look at its first two columns: they should be the “component score coefficients”. 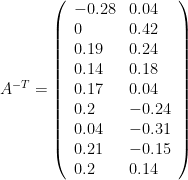 They are. Recall the “component score coefficients”, as computed according to Bartholomew:

Then F^T is the projection of X onto the reciprocal basis, and must agree with the scores as we already computed them:

, and his scores are the

matrix. Bartholomew et al. have factored the data matrix the same way Harman did. (Good. it’s nice that they agree with a classic text.)

There is another way

But there is another approach to all this. After all, we know how to factor a data matrix. In fact, I started this process by factoring it!

There’s just that one little caveat: the singular values w are not quite the square roots of the eigenvalues – because there’s a pesky factor of

To be quite explicit, suppose we do an SVD of the standardized data X:

but the eigendecomposition gave us

and we may choose, as I did, to set V = v. (That’s pretty major: we are requiring that u and V have consistent signs.) Then we see that

(as we confirmed earlier.)

Now go back and rewrite the SVD (cutting down u to u0 that it is conformable, i.e. the right size) :

For A invertible, we may then infer that

(I have to tell you that I found that his scores were 5 u0 before I understood why. I was a little annoyed that they were so much simpler than projections onto a reciprocal basis.)

So let’s compute 5 u, and take its first two columns. (In fact, we could compute the full matrix 5u rather than 5 u0; I would never take more than 9 columns of it, because that’s all the columns I have of data X, and the scores are the new components of the data.)

Here are the first two columns of 5 u: 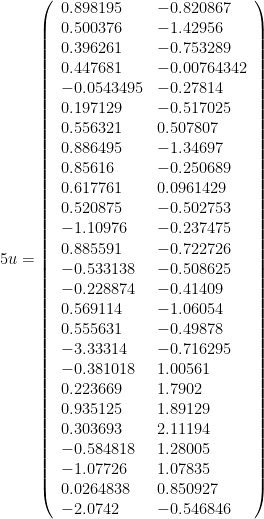 I want to confirm the factoring of the data, that the product of the scores and the loadings is the standardized data. Let’s compute (5 u0) A^T. For this I need the cut-down u. Since A is 9×9, u0 must have 9 columns.

So I compute it. the difference between the product and the data,

Let me emphasize that the

showed up because we used

instead of w. If we’d never seen the eigenvalues

of the correlation matrix, computing scores would have been simpler, because we’d have used w instead of the square roots

But, of course, the scores and loadings would have been different: we would have gotten a different matrix A. Instead of

we would have had

Anyway, we know 3 equivalent ways to compute the scores for Harman’s or Bartholomew’s model:

Ah, they’re not quite equivalent: what we just worked is a case where A was invertible.

What if A is not invertible? Equivalently, what if there’s a zero eigenvalue?

That is a very real possibility, even for real data: if the rows sum to exactly 1, then, as we saw, both the correlation matrix and the covariance matrix have a zero eigenvalue.

In such a case,

is probably the way to go, although we can make the other computations work. Let’s look at such a case next time..