I am pretty well standardizing my notation. V is an orthogonal eigenvector matrix from an eigendecomposition;

is the square roots of

Ah, X is a data matrix with observations in rows. Its transpose is

The (full) singular value decomposition (SVD) is the product

, with u and v orthogonal, w is generally rectangular, as it must be the same shape as X.

The cut-down SVD makes a square matrix w0 out of w, and I write

. I only do it in order to make an invertible form of w. For the product to work, we must drop some columns of u, and possibly columns of v.

By the same token, if any eigenvalues

are zero, we would drop them, and make the diagonal matrices

invertible. And, again, conformability requires that we drop columns of V. (There is no U, unless I also do an eigendecomposition of

, which is not all that likely.)

A is a weighted matrix derived from V. It is usually defined as

, and V. I do distinguish things derived from the eigendecomposition (

Here are the eigenvalues of the computed correlation matrix:

I can get a scree plot and confirm their fig 5.6. That is, we simply plot the each eigenvalue against the order in which it occurred. Personally, i would have used percentages rather than the actual eigenvalues. Regardless, we would probably keep 3 or 4 of the eigenvalues. (We discussed both of these way back in the Jolliffe posts, which followed Harman, the beginning of the PCA / FA category.)

I start to say that their definition of loadings is, in fact, Davis’

. There’s quite a difference. Do you recall it? (I will, later and in some detail.)

Their definition of loadings is the weighted eigenvector matrix: best to write it as

as a diagonal matrix with the following diagonal elements, which are

For reference, here are the first three columns of the orthogonal eigenvector matrix V: 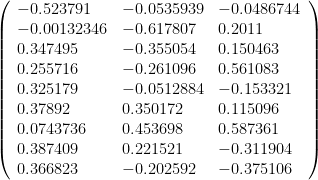 and display only the first 3 columns, rounded. 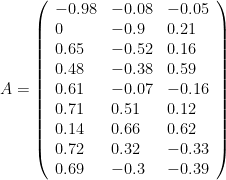 Now plot the first two. But change the sign of the second (only to match them for the drawing).

Next, we get “component score coefficients”. They define them as eigenvectors weighted by

. (Doesn’t that division remind you of a reciprocal basis, namely the reciprocal basis of A? That’s exactly what it is.) For now, anyway, I simply compute what they tell me, and get, for the first two columns:

That’s their table 5.9. and those two columns are two of the reciprocal basis vectors to A.

To compute scores, we need to introduce the data.

Well, what is the data?

Please don’t curse me out. That wasn’t as stupid a question as it sounded.

So what’s the appropriate data for the analysis? After all, over the past several months we’ve discussed four possible forms of the data

and every one of them has exactly the same correlation matrix. How do we choose?

There are only two sensible possibilities, but the fact is there are two, not just one. We can use standardized data, or we can use small standard deviates.

(In fact, we could use any multiple of the standardized data but why would we? Small standard deviates are one particular multiple, all divided by

, where N is the number of observations.)

But why must we use some multiple (possibly 1) of the standardized data? Because then the eigenvector matrix V from the eigendecomposition of the correlation matrix matches the v matrix from the singular value decomposition

of the standardized data (to within signs of columns).

‘s, it has no effect on the orthogonal eigenvector matrices u, v, V.

So now we do what most people take completely for granted, and we standardize the data, because we worked from the correlation matrix. But we could choose small standard deviates. (More to follow.)

I would check the variances; they are each 1, as they should be.

Henceforth, X is the matrix of standardized data. Here are its first two columns:

Finally, having decided upon the standardized data X, they compute the scores by projecting X onto the “component score coefficients”,

Hey, that’s why they computed the reciprocal basis: so they could get the components wrt the A basis by doing a projection. Here are the first two columns of the scores.

Let’s plot those numbers, as xy-coordinates.

That matches their figure 5.8.

To summarize: the familiar part was the eigendecomposition of the correlation matrix, yielding eigenvalues

and their square roots

, and the orthogonal eigenvector matrix V and the

. We got a scree plot of the eigenvalues, and plotted the first two columns of A.

For the unfamiliar part, we computed the scores by computing the reciprocal basis (“component score coefficients”, i.e. weighted by the inverse square roots, or

), and then projecting the standardized data onto the reciprocal basis.

There are a couple of ways to get the scores without the reciprocal basis, but there is one wrinkle. Let’s look at it next time.

if the reciprocal basis confuses you, look for it in the linear algebra category, and in the PCA / FA category…. or you could pick a month, and search for “reciprocal”.

Or, for this special case, when we only change the sizes but not the directions of an orthonormal basis, think of it as follows.

Post-multply by V (edit: not by

since V is orthogonal, i.e.

which represents old and new data components as rows, if V is orthogonal.

If we were to project X onto the new basis (2 V), however, we’d get numbers that were larger by a factor of 2 instead of smaller. That’s just wrong.

, then the reciprocal basis has columns

And then we can get new components of the data by projecting onto the reciprocal basis. If you insist on projecting, then you need the reciprocal basis. (If you want the scores to be the new components of the data wrt the A basis. Not everyone does, apparently. Harman’s or Jolliffe’s definitions of the scores are not universal: Davis is an exception. More to follow.)

As I said, however, there are a couple of ways to get the scores without the reciprocal basis, but there is one wrinkle.

Let’s look at it next time.

« surfaces: visualizing the gluing of them
PCA / FA Example 7: Bartholomew et al.: the scores »
%d bloggers like this: